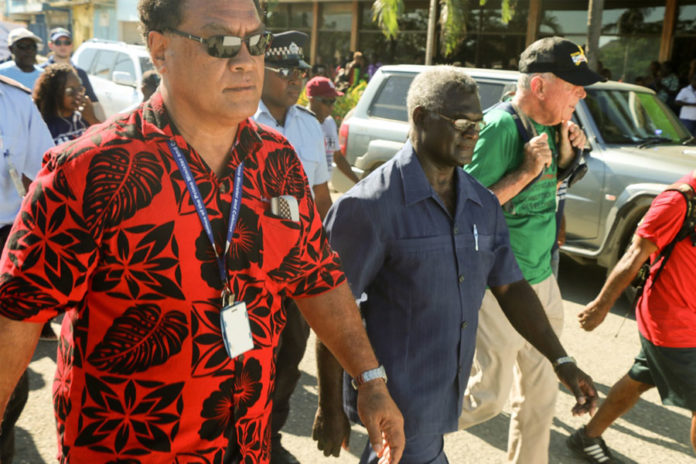 The International Anti-Corruption Day celebration which the Government had taken the lead in organizing in collaboration with the Civil Society groups was held at the National Art Gallery.

Prime Minister Sogavare took part in the march alongside representatives of the country’s Civil Society groups and members of the Public, as a show of commitment to fulfilling the DCCG policy intention to fight corruption head-on.

In launching the Anti-Corruption Strategy and Action Plan, Prime Minister Sogavare said it is a requirement of the country’s proposed Anti-Corruption Bill that the Government must launch and implement a national anti-corruption strategy no later than six months after the legislation is enacted.

As such, he said over the last six months, the Government’s Anti-Corruption Team had been preoccupied with the development of the strategy.

“We have held national workshops and have visited all the provinces to hold further consultations. To date, although we feel that we are ready to roll out the strategy, we wish to consult more during the next four weeks just to make sure we capture all the needs and aspirations of our people to fight corruption.”

The Prime Minister said it was clear from the nation-wide consultation over the last six months that the country needs more than just the legislations on Anti-Corruption, Whistleblower Protection, Leadership Code, Election, Political Parties and Ombudsman to effectively fight against corruption.

“These legislations are important for capturing and prosecuting corruptions. But equally important are initiatives to prevent corruption from happening and this is where the significance of the Anti-Corruption Strategy falls in. This strategy is an anti-corruption document that is at the forefront of preventative measures against corruption.”

The Prime Minister said he is committed to table the National Anti-Corruption Strategy in the next session of Parliament and it will be at that time that the strategy will become available as a reference document for the public.

He explained that it was his decision to launch the strategy today because he wants to commence the implementation of its action plan as soon as possible.

For this reason, Prime Minister Sogavare said the anti-corruption team will soon be putting together the ‘Phone for Corruption’ project so it is ready for implementation by early 2017.

The Prime Minister announced said in the meantime the Government has already taken steps to strengthen its position in the investigation and prosecution of financial corruption in the public sector.

“As of August this year, the Royal Solomon Islands Police Force and the Ministry of Finance and Treasury have formalised their cooperation to work closely with regards to investigation of corruption acts in the handling and management of public funds and assets.”

“As a result of this new initiative by our two agencies, we have now a total of 13 cases. Two arrests have been made and seven more are to be made in the next few days. Of course more are expected to be under intensive scrutiny of the Janus Task Force once it casts focus on other Ministries.”

Whilst the Prime Minister expressed delight over the initiative and its achievements so far, he will not be celebrating just yet as they simply indicate a lot more offenders are out there and the Government through the taskforce should work harder because the chain of corruption will only be broken when all the offenders are arrested to be held accountable for their offences.