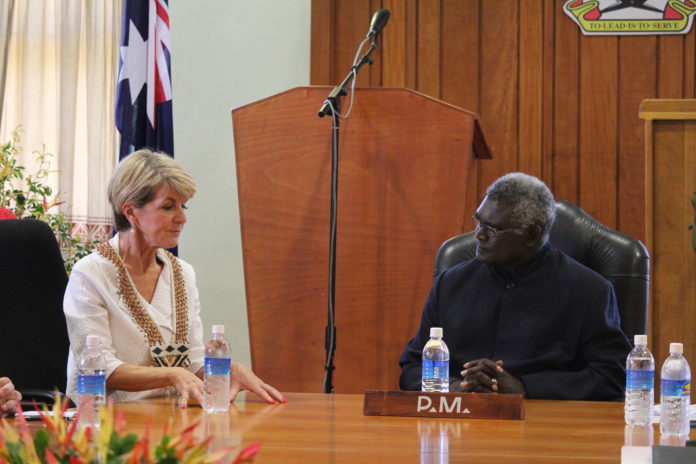 Prime Minister Sogavare, Minister of Foreign Affairs and External Trade, Hon Milner Tozaka, Minister of Police, National Security and Correctional Services, Hon Stanley Festus Sofu and Minister for Tourism and Culture, Hon Bartholomew Parapolo met with the Australian Foreign Minister and her delegation when they stopped over in Honiara for the first leg of a tri-nation Pacific tour.

Speaking at a joint Press Conference with the Australian Foreign Minister at the end of the bilateral dialogue, Prime Minister Sogavare said, “We had a very fruitful meeting covering a wide range of issues of common interest to Australia and Solomon Islands.”

He said the Regional Assistance Mission to Solomon Islands (RAMSI) drawdown was amongst the topics of discussion.

“We briefed the Australian Foreign Minister and her delegation about the RAMSI drawdown and told them that we are satisfied with the arrangements in place for the eventual RAMSI exit.

“We told them that we are satisfied with the preparations in terms of RSIPF police capability including rearmament and the sustenance of peace and law and order in post RAMSI Solomon Islands.

“We acknowledged the fact that we cannot post police officers through the country but we will address this situation through the community policing network which has been going on very well with support from the Australian Government through RAMSI.”

The Australian Foreign Minister in turn said the composition of her delegation underscores the bipartisan commitment by the current and successive Australian governments to Australia’s relationship with Solomon Islands.

“We are friends, we are neigbours, we are partners and this is being demonstrated by our historical connections from the time of your independence. And also, when Solomon Islands needed help, Australia was pleased to lead RAMSI to Solomon Islands 13 years ago to help restore law and order.

“Nearly 14 years on, I believe RAMSI has completed its mission. Law and order has been restored, there has been a re-establishment of government institutions and rebuilding of business and community confidence in the (local) police and also in the nation.

The Australian Foreign Minister added that, “We have received an assurance from the Solomon Islands Government that the Royal Solomon Islands Police is ready to take over full responsibility for policing and national security.

“We are delighted with the progress that has been made with the Royal Solomon Islands Police Force. It is well trained, it is professional, it is disciplined and the people of Solomon Islands have reason to have confidence in their police.”

Nevertheless, she further added that Australia wants to ensure that it continues to work with Solomon Islands should an emergency situation arise in the future.

Thus, she said, “We (Government of Australia and Government of Solomon Islands) have agreed to enter into negotiations for a security treaty which will be the first of its kind in the Pacific. We are in the process of negotiating that security treaty and we are to finalise it as soon as possible.”

“What this means is that in the event of an emergency, if a situation in the future should arise then Australia will be there to support Solomon Islands through any difficulty.”

The Australian Foreign Minister said having a treaty in place will ensure that the two countries will continue to work together despite whoever is in government in Honiara and Canberra.